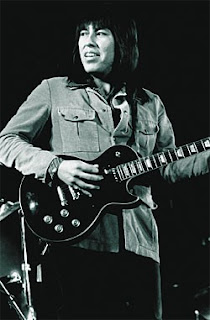 Charismatic Jesse Ed Davis was truly one of the rare breed known as a “guitarist’s guitarist.” On session after session in the late 1960s and 1970s, he epitomized the concept of playing for the song, drawing deeply from country, blues, rock, and R&B influences without mimicking anyone. He recorded with three of the Beatles and blues giants John Lee Hooker, B.B. King, Lightnin’ Hopkins, and Albert King. He appeared in the film Concert for Bangladesh and played sessions with Eric Clapton, Gene Clark, Neil Diamond, John Trudell, and many others. He released three solo albums on major labels. And yet despite these accomplishments, Jesse Ed Davis remains best known for his work on the early Taj Mahal albums and for being “the guy who inspired Duane Allman to play slide guitar.” END_OF_DOCUMENT_TOKEN_TO_BE_REPLACED