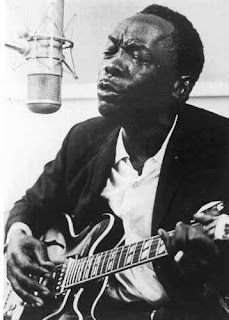 A few weeks into my freshman year at the all-boys Jesuit high school in Detroit, I went to my first school event: a concert in the commons. The performer was none other than John Lee Hooker. I knew nothing about him, other than one of my favorite albums, The Best of the Animals

The rowdy audience of preppy teenagers quieted down when John Lee Hooker was announced. Hooker, who still lived in Detroit, walked in wearing a black leather coat and a Russian-style black hat, both of which he left on the entire evening. Carrying a red semi-hollowbody guitar, he worked his way to a small stage set up in the middle of a large room with a circular balcony that doubled as a running track. He plugged into a small amp and eased himself into a folding chair illuminated by single spotlight. Tapping time with both feet, he began playing staccato blues riffs with his thumb and forefinger while moaning in a deep, resonant voice. Never having heard anything like this before, I was instantly mesmerized. 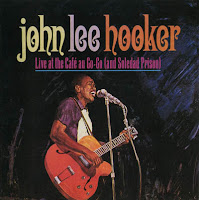 album, recorded the previous summer with the Muddy Waters band, and at our show he covered most of the songs on the record, sans accompanists. Seldom opening his eyes, he sang his menacing “I’m Bad Like Jesse James” and heart-wrenching “When My First Wife Left Me,” “It Serves Me Right to Suffer,” and “I’ll Never Get Out of These Blues Alive.” He picked up the pace for “Bottle Up and Go” and “One Bourbon, One Scotch and One Beer,” rocked the house with “Boom Boom,” and closed the show with his almighty “Boogie Chillen” and “Dimples.” Wow!
This night marked the beginning of my love for the blues. I went right out and got Live at Café au Go-Go. In time, I filled orange crate after orange crate with blues LPs. When I b

ecame a music journalist in the 1970s, I made it my mission to interview as many blues artists as I could find. Best of all, I was blessed to become friends with John Lee Hooker.
.
Jim Marshall, who shared my love for the man he always referred to as “Mr. Hooker,” photographed two of my interviews with John Lee Hooker. When I was choosing a cover for my book Rollin’ & Tumblin’: The Postwar Blues Guitarists

, he suggested I use a shot he’d taken around the time of that concert in Detroit. I gladly accepted.

Donations to help maintain this Archive are appreciated.

© 2010 Jas Obrecht. All rights reserved. This article may not be reposted or reprinted without the author’s permission.